Life, Liberty and the Pursuit of… quiet

Noise is a top city NYC quality of life complaint. Although some degree of noise is expected in an urban environment as large as New York City, keeping it within acceptable limits is a challenge, and defining what are “acceptable limits” is even more of a challenge.

In an attempt for some type of enforcement, Mayor Bloomberg instituted the “Operation Silent Night” initiative last October. “Operation Silent Night” is a multi-agency collaboration with the mandate of improving quality of life in excessively noisy neighborhoods. Criteria for being put on the list include the numbers of complaints to the Quality of Life hot line.
“Operation Silent Night” is also part of the NYPD's broader commitment to continue to prevent quality of life infractions in New York City. Blaring music from clubs and car stereos — loud and unruly bar patrons — the roar of speeding motorcycle engines and the continuous din of honking horns — all come together to create the sense of disorder that can lead to more serious crime.

Unfortunately Middle Village and Maspeth are not included in the NYPD's targeted area for noise enforcement. However that doesn't prevent officers from the 104th Precinct from issuing summonses for noise. However the JPCA has learned that most officers do not even know the laws concerning noise violations. As a result noise complaints and issues are spiraling out of control. Noise is now the biggest threat to our quality of life.

Acting on a request from President Bob Holden and the Juniper Park Civic Association, Community Board #5 voted a request for a sound barrier on the southside of the Long Island Expressway from 69th Street to 85th Street. The JPCA has also been fighting to force the State Department of Transportation to make good on their promise to “Diamond Grind” the roadbed of the LIE as it passes through Maspeth and Middle Village. Several years ago the quieter asphalt roadbed was replaced with the much noisier concrete roadbed and combine this with more traffic from additional lanes and hundreds more diesel trucks an hour, and the situation is unbearable for those living near the LIE.

Congressman Anthony Weiner, newly appointed to the Transportation Committee, promised to explore ways to cut the excessive noise from the expanded expressway.

To put the noise volume definition into focus this may help – noise is measured in decibels (dBA). The U.S. Environmental Protection Agency's recommendation for protective noise levels is 55 dBA during the day and 45 dBA at night. Normal conversation is 60 dBA, while motorcycles register 90 dBA and rock concerts 140 dBA. Continued exposure to 100 dBA for more than fifteen minutes can put workers at risk of permanent hearing loss, according to the federal Occupational Safety and Health Administration (OSHA). Each increment of 10 dBA is perceived by the human ear to be a doubling of the noise level.

These numbers give you an idea of what we’re dealing with when we talk about motorcycles, “souped-up” car engines, lawn mowers and blowers, car alarms and horns, barking dogs etc.

Air travel is becoming the number one choice of travel over car transportation and presents a growing noise problem. Queens is home to two of the nation's busiest airports, JFK and La Guardia Airport. Among U.S. airports with the most neighbors affected by noise, La Guardia ranks number one, while JFK is seventh, according to a study by the Natural Resources Defense Council.

Helicopters are an increasing source of noise around New York City, the world's busiest helicopter zone, with its growing business of flights – corporate, charter, media (especially around the LIE) and law enforcement – that mostly depart from three Manhattan heliports. More than half of the 70,000 helicopter flights over the city each year are sightseeing tours.

Natural Resources Defense Council study on the environmental impact of helicopter noise on the tri-state region found that helicopters are inadequately regulated with no minimum flight altitudes or required flight paths in most places. Supervision of the helicopter industry, under the jurisdiction of the FAA, has little capacity to control the harmful effects of helicopter engines on the population. Helicopter routes in Manhattan are essentially voluntary agreements made between the FAA and helicopter operators, so they can be changed at whim, disrupting the quality of life of those below their flight path.

In an effort to establish long-range public policy on this issue, New York City's Economic Development Corporation (EDC) has drafted Heliport and Helicopter Master Plan for the City of New York recommending restrictions on tourist sight-seeing flights and flight paths over the City's densely populated residential areas. The master plan, however, underestimates the community, environmental and health impacts of helicopter growth in NYC, and fails to discuss adequately all possible alternatives to current growth projections.

Subways are another noise source and passengers are still being exposed to horrible noise conditions. Decibel surveys of the New York City subways have registered noise levels as high as 116 dBA. Transit officials do not systematically measure the sound levels in the subway and the agency has no noise abatement program. The agency is, however, experimenting with wheel lubricants to produce a quieter ride.

In Middle Village/Maspeth we must demand that noise laws be enforced. when noise affects your quality of life please dial 311. The more noise complaints logged in this area, the more attention we will get. 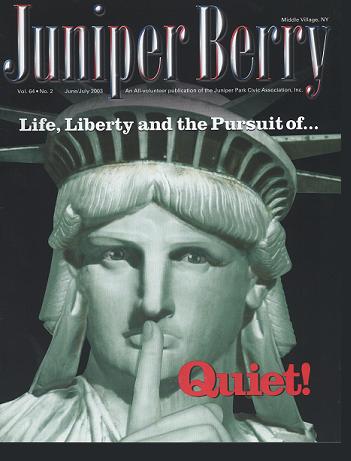