Mayor Bloomberg versus The Democratic Hopefuls

The opposition to the Cross Harbor Rail Freight Tunnel, although barely audible in the year 2004, has increased its’ crescendo in the year 2005. Indeed the volume was definitely turned up when Mayor Michael R. Bloomberg announced at the March 3, 2005 Juniper Park Civic Association meeting that he had carefully studied the proposal and that it was a project that should not be done. Now! It’s “election time” and the Cross Harbor Rail Freight Tunnel issue has risen to the decibel level of the campaign for The Mayor of The City of New York. Mayor Bloomberg noted that he would not put up the 20% matching funds required of this federal project.

Since the Cross Harbor Rail Freight project includes acquiring 140 acres of private land in Maspeth and displacing approximately 50 businesses that employ up to 2500 people, the staff of the “Juniper Berry” has done extensive research on this project. We have combed through the Draft Environmental Impact Study(DEIS). The DEIS revealed that the transmodal storage facility that would be erected in Maspeth would have a footprint of 43 acres, stand 200ft high, with a volume of 413,000,000 cubic feet. A facility 31⁄2 times larger than the Pentagon would clearly hold an enormous amount of goods that would now have to be distributed by truck to Long Island, Westchester, Connecticut and into Manhattan through the already saturated East River crossings.

In addition to the enormity of the proposed project in our neighborhood, “Railroad People” have advised us that they don’t need the tunnel and that they would never use it because it is not cost effective. The railroads are being told they would be charged $1000 dollars per car to use the “Tunnel”. In past issues of the Juniper Berry we have described how Long Island and east of the Hudson are connected to the national rail network and many other deficiencies with the (DEIS). Thousands of copies of the Juniper Berry have been distributed locally and mailed to prominent members of congress.

The following language is taken from a 1998 report prepared by Hugh O’Neill and Mitchell L. Moss entitled Tunnel Vision, An Analysis of the Proposed Tunnel and Deepwater Port in Brooklyn. The report was prepared at the Taub Urban Research Center of the Robert F. Wagner Graduate School of Public Service at New York University.

Conclusion: The economic future of New York City does not lie in its past glory as a maritime center. Rather, New York City must look forward, not backward. The proposed hub port and rail tunnel are Industrial Era projects ill suited for the information economy of the 21st century.

Furthermore, the proposed hub port rail tunnel represent a genuine threat to many of the communities and industries currently located in southern Brooklyn.

In light of the facts and the reality that a tunnel is not wanted or needed, Sewell Chan reports in The New York Times on Wednesday, August 3, 2005 that hours after the House of Representatives approved a big transportation bill on Friday morning, Representative Jerrold I. Nadler informed the Port Authority of New York and New Jersey that it would get a $100 million federal grant to design and engineer a freight tunnel under New York Harbor.

Usually. News of such largesse would be a cause for celebration. But, the Port Authority did not ask for the $100million, said it did not know about the grant, and it is not very interested in the project.

The unusual circumstances surrounding the $100million grant – which dwarfs all other individual appropriations for New York – reveal much about the peculiarities of federal transportation spending, in which huge appropriations are approved every few years in a manner that that some deride as a pork opportunity.

In the August 11, 2005 issue of Crain’s Business Week Greg David’s article entitled NY Harbor tunnel a drain on worthier transit projects mentions that he was visited by a unnamed congressman who admitted that he saw no value in Congressman Jerrold Nadler’s dream to build a freight tunnel under New York Harbor. “I am not going to tell Jerry that,” he said. “If I did, Jerry would try to eliminate my projects.”

The passage of the recent $286.4billion highway and transit bill in congress shows how deeply that attitude has taken hold in Washington. Rather than bringing more aid to New York, such political logrolling threatens the region’s most important projects. The writer also mentions that Nadler realizes that the day of a busy port in Brooklyn are long gone and is now trying to turn his scheme into a national security measure. He’s promoting the tunnel as a means to keep the economy moving if terrorist disable the George Washington Bridge. The article also mentions how Congressman Anthony Weiner won $15 million in the bill for ferries to connect the Rockaways with Manhattan. Never mind that the three boats required will cost more than that sum and that studies have shown that such a service would require huge subsidies.

Congressman Weiner’s attitude toward his constituents anti–tunnel stance is rooted in the fact that even in his college days at SUNY- Plattsburgh he failed to do his homework. Dr. Stephen Steinlight noted in a July 23, 2004 article that he wrote for FrontPageMagizne.com that he somehow managed to get him through the English Composition course that he had previously flunked. But, when he visited the junior congressman in Washington he spoke disparagingly about things “academic”- such as reading books and thinking abstractly – he lavishly praised himself for having honed a for more greater source of wisdom. (He imagines his ”street smarts” equal to Dirty Harry’s.)

Congressman Weiner’s poor study habits and failure to do the necessary research to understand that the “Tunnel” would not solve the truck traffic problem but only jeopardize the well being of many neighborhoods in his congressional district underscores the evaluation made by Dr. Steinlight of Congressman Weiner – an intellectually slovenly, arrogant know-nothing. Now! He has the crust to throw his hat in the ring for Mayor of the City of New York.

Mayor Bloomberg was graduated from Harvard with an MBA – he always did his homework. Mayor Bloomberg studied the Cross Harbor Rail Freight Tunnel project from the social and business aspect that is why he realized it did not make sense and should not be done. Congressman Weiner is only looking at the political aspect and singing the Nadler Song – “How Can I Waste the Taxpayers’ Money?” 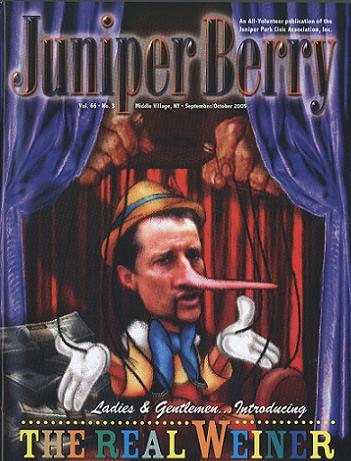