Too Much of a Bad Thing

Speeding Cars, Noisy Motorcycles, Motorboards, New Drivers… you name it we’ve got it the around park.

If you live in the Juniper Valley Park area you know the amount of speeding cars and motorcycles that the community endures twenty-four hours a day. It is not unusual to see cars and motorcycles racing on the wrong side of the street. In the warmer weather the noise is unbearable. I sometimes think we have more noise on Juniper Boulevard North & South than at JFK or LaGuardia. Unfortunately the park periphery has roadways that are about the only perfect ones in Queens and this invites the reckless racing.

The Juniper Park Civic Association is well represented at the monthly COP 104 meetings and we have repeatedly complained to the police about the dangerous conditions, particularly around the park. While the police have done the best they can with their limited resources we have never succeeded in getting a sustained crackdown. We feel strongly that the threat of tickets and the possibility of having their cars confiscated would certainly make drivers think twice before they blatantly race the streets.

To compound the problem we have many double-parked cars and motor vehicle testing several days a week on Juniper Boulevard North. We have school crossings, large numbers of pedestrians and a park that reeks with activity. In recent years we have seen the number of bicyclists increase and this too adds to the danger. I have seen people, old and young, mercilessly harassed by the reckless driving. Navigating Juniper Boulevard by car or on foot has become a daunting undertaking.

We feel strongly that it is useless to put up more full stop signs because they are effectively ignored. The only deterrent that could make a difference is the installation of speed bumps. DOT has successfully launched this project at the various school sites in the neighborhoods but the bumps are needed on the more vulnerable roadways. Juniper Blvd. North is one of them.

The argument that the bumps are noisy and create problems for emergency vehicles is absurd. Nothing is noisier or more dangerous than supped-up cars and motorcycles and if you've seen the emergency vehicles race through our intersections you know there is nothing that will slow these guys down. Emergency vehicles create their own hazardous conditions and that will be the subject of another article.

Since the police have limited resources and the 104th Pct. is handicapped with severe understaffing, we are putting the political arm on our elected officials to help with this problem. We are asking them all to write their letters and make the phone calls that could get us tangible results now. We have experienced the speeding problems around the park for too many years; we must tap the current technology and resources to solve the problem. Waiting for the body bags to jump-start the solution would be a tragedy. 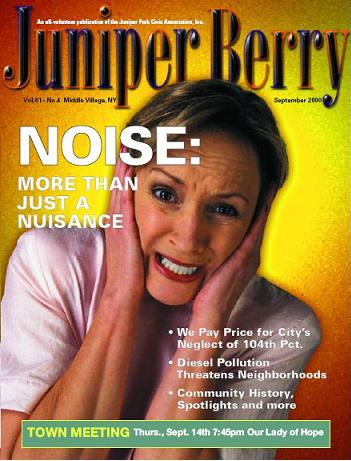