While growing up in Middle Village even as a youngster I always noticed the deep pride my parents felt in having left “the old neighborhood” and settling in what was then referred to as “the country,” – Middle Village. Boy, did they love this area and one of the manifestations of that pride was their deep loyalty to the Juniper Park Civic Association, telling my brother and me, a civic association was the only tangible way to preserve your quality of life. As kids, what did we know, what did we care? Well, I'm a little older now and “I get it!”

We are so fortunate because still residing in Middle Village we have a living legend, one of my parents' peers and an original member of the Juniper Park Civic Association, Larry Camilleri.

Larry Camilleri will be 87 years old on New Years Day, 2003. He and his deceased wife, Terri, like my parents, were always active members of the JPCA, Larry since 1950. Larry still exudes that same deep pride my parents passed on to me. In fact, Larry's pride and sense of duty resulted in his having served two terms as President, two terms as Vice President and he was the JPCA Treasurer for sixteen years.

I can still see Terri Camilleri going door-to-door collecting dues like it was yesterday. A nice woman, she was always so cheerful and pleasant despite being afflicted with Multiple Sclerosis. Always the good guy, Larry spoke so fondly of his wife and he stated that he took care of her in the wheelchair for fourteen years. It should be mentioned that Terri Camilleri was a volunteer writer for the Juniper Berry. She did a news column about the neighborhood and also welcomed newcomers to the community.

When I spoke to Larry recently he told me how they used to hold the JPCA Executive Board Meetings at his house and also at the top of the hill on 84th Street and 60 Road, now the VFW Hall. He remembers when the dues were $2 and he instituted the practice of door-to-door solicitation, with the solicitor getting 10% of the “take.”

Larry Camilleri was a well rounded community leader and his sense of duty was evident in his work with Our Lady of Hope RC Church. Larry ran the bazaar at OLH for many years. In fact he talks about the fact that since the bazaar was always held in May and ran for ten days, he never had a Memorial Day off. Before 1960 Larry ran the bazaar at Resurrection Ascension Church with Father Parks. He states that under Father Parks' tutelage, he learned everything there was to know about that aspect of church fund raising.

His expertise in fund raising was enlisted when they embarked on the building fund for OLH Church. Larry rounded up the workers and started a pledge drive to build the church. They needed $400,000 before they could start. Through the generosity of our people they managed to raise $700,000. As a result, the church was built and ended up having just a small mortgage that was satisfied pretty rapidly. He is quick to tell you there were many good workers who came forward to help in that huge undertaking. We now have the beautiful Our Lady of Hope RC Church on Eliot Avenue and 74th Street in Middle Village and we have the likes of Larry Camilleri and his OLH Building Fund Committee to thank for that project.

Larry also lists on his resume – Our Lady of Hope, Trustee, Member of the Holy Name Society, St. Vincent dePaul, which helps the less fortunate in our parish and he is a retired usher. Also he ran the teen club at Resurrection-Ascension with Father Fagan now of Little Flower Children Services, Wading River.

I could go on talking about Larry Camilleri because he is a man who can look back on his 87 years with pride and accomplishment. He and his wife raised three productive and successful sons, all “made in Middle Village” products. One of his sons, a retired lawyer, is taking Larry on a cruise for one month.

We sometimes wonder how our neighborhood stays so beautiful and the usual “aren't we lucky” speech could be heard. Well the likes of Larry Camilleri are the living legends who personify the hard work it takes to make us look “so lucky.” Thanks Larry, you are another one of our neighborhood treasures. In fact we should start a “Neighborhood Treasure” Hall of Fame and the name Larry Camilleri will be right up there with the best of them. 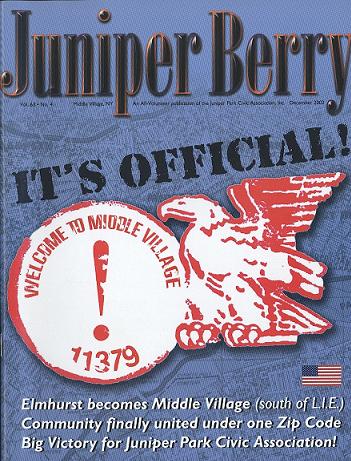