The 104th Precinct has long been referred to as the “Forgotten Precinct in the Forgotten Borough.” Located on Catalpa Avenue, the precinct serves the communities of Ridgewood, Glendale, Middle Village, Maspeth and South Elmhurst. Last year it had the dubious distinction of being the only precinct in Queens County to experience a rise in crime. Even more shocking, the precinct ranked 9th in total crime in the City of New York, including second in burglaries and auto theft citywide; a statistic that most people in the precinct find hard to swallow. If this was not bad enough, the precinct was also the slowest in the county to respond to an emergency crime-in-progress.

The 104th desperately needed a creative commander to turn things around. Enter Captain Joseph Culbert. Nicknamed “Captain Fixer” by several officers who have served under him, Culbert was known as a shining star within the ranks of the NYPD. He was hand picked by headquarters to straighten out the 70th Precinct in Brooklyn after the Abner Louima incident. He improved relations with the community and helped get things back to normal. He was so appreciated by residents in the 70th Precinct that they honored him with two awards. Two months ago, 800 residents showed up to thank him for the wonderful job he performed in their community.

When he took over as commander of the 104th Precinct on January 10th, crime was already up 20% for the year. Culbert immediately went to work. “It is my job to manage with the resources I have and to address crime with these resources. My goal is to reduce crime and to preserve the quality of life in the neighborhood. Often I have found that by addressing the small problems we can avoid larger problems down the road,” he stated at his first COP104 meeting with the community.

Culbert focused on several ways to reduce crime and improve the 104th’s emergency response time. He determined that much of the crime was being perpetrated during the daytime hours (9 A.M. and 3 P.M.) by mostly youthful offenders. He stepped up efforts on truancy, focusing on Grover Cleveland High School in Ridgewood. He then turned his efforts on a rash of armed robberies being committed in the precinct. He studied the pattern of the robberies and just last week, 104th Precinct officers apprehended the suspect who eventually confessed to 10 robberies in the area.

To say that his creative approach paid immediate dividends is an understatement. Crime is down 17% since he took command of the 104th. He did it with hard work and long hours. At one point he had worked 20 straight days without an off day. He often slept in his office by putting two chairs together. Then 104th officers chipped in and bought him a futon to sleep on.

Officers in the 104th respect him. He is their kind of commander, a captain who treats them with courtesy and respect. He is a captain with a proven twenty year track record.

Two weeks ago during the stressful funeral and burial at Cypress Hills Cemetery in Ridgewood of Patrick Dorismond, the unarmed security guard shot by police, Culbert was filing a report by cell phone to his borough supervisor, Deputy Chief Dewey Fong. The report was recorded on Fong’s voice mail. Culbert thought he had pressed the “end” button on the phone but the call failed to disconnect.

Apparently Culbert and an unidentified officer started a conversation involving Fong. The officer next to Culbert relayed a story he had heard about an incident in a precinct where Fong, who is Chinese-American, walked into the station house wearing civilian clothes and carrying a paper bag. Fong was mistaken for a delivery man by the desk sergeant. An embarrassing moment for the sergeant to say the least.

The entire conversation was recorded on Fong's office voice mail. Upset by the banter and the telling of the story, Deputy Chief Fong filed an EEOC (Equal Employment Opportunity Complaint) to headquarters. Finding it not appropriate for their jurisdiction, EEO forwarded the complaint to the NYPD’s Internal Affair Division. On a recommendation from Deputy Chief James Tuller, Commander of Patrol Borough Queens North and Deputy Chief Fong, his Executive Assistant, Culbert was immediately removed from his command at the 104th Precinct and transferred to Brooklyn North.

The story was then leaked to the press from somewhere within the ranks of the Police Department. The New York Daily News and later the New York Times, New York Post, WINS radio and New York 1 TV all reported misinformation and grossly exaggerated details without mentioning their sources. All stories commented that Culbert, another officer and a lieutenant had directed racial slurs against Fong.

However, according to information obtained by the Juniper Park Civic Association, no racial slurs were directed at Fong, simply the officer was relaying a story he had heard. The tape of the conversation exists and when and if it is released we are confident that it will vindicate Culbert and the other officer. Many cops, including high ranking officers within the NYPD were shocked at how the entire incident was mishandled.

Deputy Chief Fong, #2 man in the borough for the past 3 1/2 years, is still relatively unknown to most civic leaders in the area. Earlier this month, Fong raised the ire of many community leaders by removing P.O. Linda Marmara from her post in the Borough’s community affairs office. Marmara was well-like by community leaders.

It is the opinion of the Juniper Park Civic Association, COMET (Citizens of Maspeth and Elmhurst Together), COP104 and Citizens for a Better Ridgewood, that the Culbert matter has been grossly mishandled. It should have been dealt with internally, within the NYPD at the borough level. Certainly the NYPD should not have leaked information regarding the case. Ruining careers of talented and loyal officers should not be tolerated.

The Juniper Park Civic Association is calling for an investigation by the NYPD's Internal Affairs Division as to how information was leaked to the press. We are also calling for a transcript of the tape to be released so that the truth can be told.

If and when Captain Culbert is vindicated, we are requesting his immediate reinstatement as Commander of the 104th Precinct.

COP104 (Committee of Organizations of Precinct 104), a coalition of 12 civic and business organizations, supports Captain Joseph Culbert and the other officer who have been unjustly accused and tried in the press. 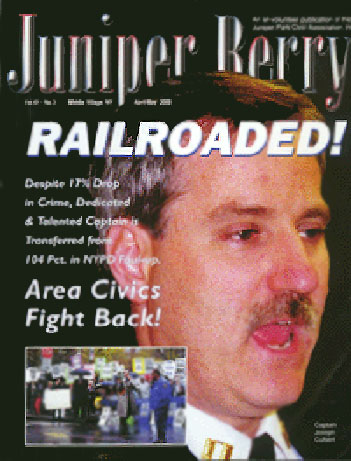