Without question, we do not need the Cross Harbor Freight Rail Tunnel, but, we do need the freight rail infrastructure up-graded to 21st Century standards. When I look at the rusted rails and bridges and the more than fifty-year old signal systems being used on our railroads it reminds me of the lyrics of that famous song – “listen to the rattle and the rumble and the roar, listen to the whistle of The Wabash Cannon Ball.” When I was a young boy during World War Two, I rode on the LIRR to Lake Ronkonkoma with soldiers headed out to Yaphank and the coal fired steam engine did indeed rattle and roar. Back then, there was only one track between Farmingdale and Ronkonkoma. In those days, it felt as though Ronkonkoma was almost at the end of the world and nobody ever conceived that a man would be standing on the moon in 1969. What I can’t believe is that in the year 2007 there is still ONLY one track between Farmingdale and Ronkonkoma.

I begin these observations and comments with an experience from my youth to illustrate the lack of vision on the part of all those who have been entrusted with the duty to develop and maintain a viable freight and passenger network that would efficiently serve the public by connecting all modes of transportation. I am particular concerned as a resident of Queens for 70 years that many railroad right-of-ways have been abandoned or are underutilized.

Although all forms of technology have taken quantum leaps during my lifetime, I believe it is “back to the future” with regard to assessing and evaluating the need to rejuvenate the rail infrastructure in Brooklyn and Queens. Incidentally, the 2005-2030 Regional Transportation Plan cites a study for a third track on the LIRR Main line from Queens Village to Hicksville, however there is no mention of a second track from Farmingdale to Ronkonkoma. The immediate installation of a second track would eliminate a reverse commuter problem that now exists and encourage 40% more freight traffic to be moved each day from east to west. This could eliminate several hundred daily truck trips from the L.I.E.

I call to your attention the fact that the old Bay Ridge Line and the connecting rail corridor that is used by the CSX Railroad to haul freight from Long Island, Brooklyn and Queens to the rest of the United States of America serves a geographic area housing approximately 8 million people. Indeed this rail link is in desperate need of upgrading not only as a freight rail route but also as a passenger link through Brooklyn, Queens, the Bronx and points north and east. With regard to this rail link, which could tie into the Erie Basin Barge Port, this rail line crosses a number of rapid transit lines that go to Manhattan and points east such as the F, L, M, N, R, and W subway lines. The link also crosses the LIRR at the East New York Station. As the rail-line continues into Queens it crosses the under-utilized LIRR Montauk line and the Main line of the LIRR to Manhattan and Jamaica. At Calamus Avenue this crossover provides an easy connection to the LIRR main line. The line’s further northward travel takes it over the Hellgate Bridge to the Bronx where it can connect with Metro- North and Amtrak.

The language of The 2005-2030 Regional Transportation Plan clearly notes that it is not a static document, but a flexible tool that can assess and respond to changes in trends, conditions and needs. And, it is in light of this concept that I request the appropriate agencies to undertake a feasibility study, institute a plan and secure the necessary financing to begin construction on a 21st century rail corridor that would manifest a transportation vision that has been missing from the drawing board for 50 years.

The concept that I propose except for connecting the Erie Basin Barge-port to the Bay Ridge Line would require a minimal amount of eminent domain use because in all other aspects of implementing this improved freight and passenger service, the right-of-way already exists. For example, upgrading the Montauk Line would probably require removal of the grade crossing at 88th Street in Glendale, a new stop at “Atlas Park “ and when the new bridge over the Fresh Pond Road Metropolitan Avenue junction is constructed, a new Fresh Pond Road Station should be constructed on the new up-dated Montauk Line.

Considering the fact that implementing my proposals would provide service to a geographic area that contains at least 8 million people and provide a route of travel that has never been available to the public, the economic feasibility should become a reality in the short term. As we all know, to date all rapid transit and passenger rail service east of the Hudson is Manhattan centric. If we intend to improve our mass transit corridors, reduce road congestion, reduce our consumption of gasoline and provide cleaner air for our children than that which we breathe, then the Metropolitan New York Area transportation network must be less Manhattan-centric. The new up-graded rail corridor could become know as the Manhattan By-pass.

In view of the above observations and comments, I note that an article appeared in the January 18, 2007 Times Ledger written by Nathan Duke reporting that U.S. Rep. Anthony Weiner stated that truck traffic on borough streets could increase by as much as 83 percent by the year 2020. Everyone including U.S. Rep. Anthony Weiner should be cognizant of the fact that in the year 2009 the Grand Avenue Bridge will be closed and the Kosciusko Bridge will receive major disruptions while a new Kosciusko Bridge is being constructed.

Since the mighty Hell Gate Bridge has our local rail system all connected to the national freight rail network, Congressman Anthony Weiner along with his mentor Senator Charles Schumer and his esteemed colleague U.S. Rep. Jerrold Nadler should pour money into immediately upgrading the aforementioned rail routes. Without question, Railroad people would work closely with the taxpayers' representatives to achieve rapid implementation of the necessary upgrades to bring the system into the 21st century.

While the congress has earmarked billions of dollars for passenger rail projects, they are neglecting a most important transportation link for freight rail service on the eastern seaboard the link that will relieve road congestion and pollution from our boroughs.

Forget about the Cross Harbor Freight Tunnel; the unions will love you because they start work now on a project everyone agrees on.

So! That's the challenge Anthony, Charles and Jerrold – are you up to it? 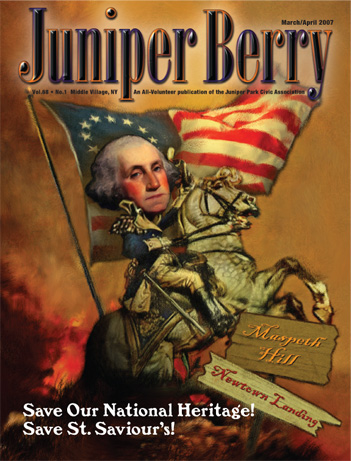