The following announcement has got to be one of the high point moments for the Juniper Park Civic Association and the best message our Congressman, Joe Crowley: “I am pleased to announce that after countless meetings, hundreds of hours of work and years of dedication, South Elmhurst which has always thought of itself as Middle Village in name, will now officially be called Middle Village by ZIPCODE. I applaud the dedication of Juniper Park Civic Association President Bob Holden and countless other Middle Village residents who have worked on this project. I also want to thank Queens Postmaster William Rogers for listening to the needs of the community and making this change to reflect the overall desire of the community,”

On Tuesday, January 28, 2003, when the change became effective, there was certainly a festive mood in the community. The Juniper Park Civic Association organized a parade and ribbon cutting ceremony which took place on the corner of Caldwell Avenue and Eliot Avenue. The honoree was Middle Village’s oldest resident, one hundred and one year old, Carl Berner, who cut the ribbon. When you get to be 101 you also get to ride in an expensive antique limousine (provided by good neighbor extraordinaire , Joe Lume)! That in itself was quite a sight! Carl was the gracious gentleman he’s always been and he handled the attention like a pro!

It was a bitingly cold night but the mood of the people warmed the occasion. After the ribbon cutting ceremony we all marched along Caldwell Avenue to OLH Auditorium for the victory celebration party. Despite the cold there were about 200 marchers who were cheering and chanting while President Bob Holden had the loud speaker chanting, “Welcome to Middle Village, Welcome to Middle Village.” People had their windows open and they cheered us on while the 104th Precinct and Captain Peter Loehle had his officers escorting the marchers.

The most touching moment of the whole march was when we got to 74th Street and in the bitter cold, people were outside in just sweaters and little jackets, clapping, whistling, cheering, you name it, it was like New Year’s Eve all over again! I have to say, it was hard to keep a dry eye. I wish I could have captured that moment on camera, it was truly stirring. No one will ever forget that experience.

When we got to OLH Auditorium, we marched in to the music of our DJ, Middle Village resident and JPCA board member, Gary Colter. With everyone cheering, music playing “Happy Days are Here Again,” the party began. We had a champagne toast, food, a beautiful cake from Bauer’s Bakery and we celebrated for several hours. To this day I am still hearing thank you’s from people in the community who were so very happy the JPCA achieved a successful journey to change the zip code to 11379.

In life, you win some and lose some, trust me, winning is better!! Future generations can look back at the stamina and strong will of the Juniper Park Civic Association, its President, Bob Holden, and hopefully it will motivate them for their journeys. 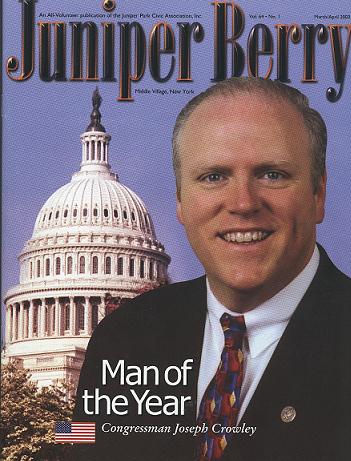