In the last issue of the Juniper Berry, I brought to our readers’ attention how Councilman Dennis P. Gallagher has betrayed his constituents and the Queens Republican Party. I clearly noted how he has been the initiator or perpetrator of many underhanded actions. Evidently, that article pierced his thin political skin, for when we, the Juniper Park Civic Association, dared to defend ourselves against this, he cried like a victim, attempting to beseech sympathy from his constituents. In order to solicit support from new Queens Community Board 5 members, at the April board meeting, he personally passed out his response to my March/April 2007 article. In this letter, the chameleon showed his true colors.

Councilman Gallagher’s letter claims that I practiced revisionist history when I wrote that he is a useless, ineffective, empty suit and hasn’t sponsored a single bill in the legislature that became law. Most legislatures denote the author of a bill and list co-sponsors separately. In the NYC Council, the very first name listed on the bill is that of the originator or author; all names following have just signed on as sponsors. Kind of like, “Hey! Put my name on that it – will make me look good in my district.” The distinction is similar to the difference between writing a book and reading a book. Now it is time to check the records.

According to the legislative details listed on the New York City Council’s website, as of May 29th, 2007, of the eleven local laws listed on Councilman Gallagher’s performance sheet, he was not listed as the author of any of the bills. As a matter of record, of the eleven bills, Councilman Joseph P. Addabbo, Jr. had authored seven. But Councilman Gallagher is a clever distorter, who understands that most people are not aware of the subtlety of how names are listed on a bill. He therefore employed a lot of exaggeration to make himself look like an accomplished legislator. This was not so clever a move considering how easy it is to reveal the truth to the public.

With regard to comments made about the opinions of the JPCA’s general membership, to the best of my knowledge no recent or current member has expressed major dissatisfaction with stances taken by the executive board on key issues facing our community. However, there are people who have written at the behest of Councilman Gallagher, sometimes using fictitious names, on letters denouncing Mr. Holden and the JPCA. Here again, the proof is in the pudding. The JPCA’s membership has significantly increased and dues payments have come in more rapidly than in past years. I agree with Dennis P’s closing sentence, “I firmly believe that the good people who are the rank-and-file members of the Juniper Park Civic will realize that in America the truth still stands for something!”

While investigating Gallagher’s fraud, I noticed the many legislative bills and resolutions that Councilman Tony Avella of the 19th Council District authored and introduced in 2006. According to council records, Tony Avella authored 17 bills and 7 resolutions last year. Please note that I am not comparing Councilman Gallagher to Councilman Avella, because it would be similar to comparing apples and bananas – it is obvious which district got the apple and which district got the banana.

Councilman Gallagher has certainly not fulfilled his obligation as a legislator for the 30th Council District.

So what has this guy been doing during his second term, if not legislating? Well, against JPCA’s leaders, he has been busy trying to intimidate us by:
• spreading lies about us throughout the community.
• calling in bogus building complaints about the home of
one of our leaders.
• trying to limit our freedom of speech.
• directing his cronies to bring a slapsuit against one of us.
• attempting to take away our livelihood.

We’re happy to report that Gallagher has failed miserably at each of these. One thing he was successful in doing was carrying out his threat to not have me re-appointed to Queens Community Board 5. Dennis P. may have eliminated my vote from the community board but he will not silence my voice in matters that affect the quality of life in our area. I find myself in good company. Last year, he removed Tony Nunziato from the very same community board, but that hasn’t stopped Tony from using his voice to shape votes that impact his hometown of Maspeth. Incidentally, in his February letter asking potential community board reappointees to come in for interviews, the councilman said he believed in term limits. So it surprised me to read in the Times Ledger on May 31st that Gallagher now feels that 8 years isn’t long enough for him to get the gist of the job!

The good news is that we are down to only 2 ½ years left of our 8-year sentence. Gallagher is term-limited and hopefully will be put out to pasture in the beginning of the next decade.

As far as the rest of JPCA’s executive board and I are concerned, with regards to the tenure of Dennis P. Gallagher as the councilman representing our district, January 1st, 2010 can’t come soon enough. 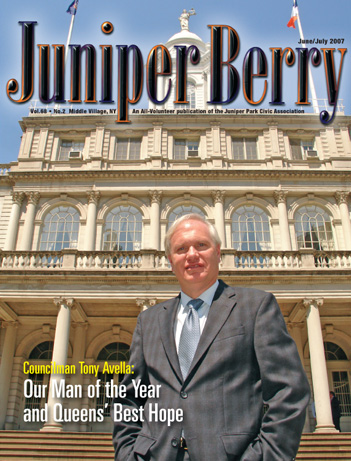