Beari Productions has been the resident theater company at Trinity Lutheran Church in Middle Village since 1997. Its co-founders, Rene Bendana and Debbie Richardson (now Mrs. Bendana), met in 1994 while playing opposite each other in a production of Call Me Madam. Beari derives its name from Bandana and Richardson. They produced their first show after meeting with Pastor Longan of Trinity and getting the thumbs up to use the hall of the Church for a show. With just $500 of their own money, they launched their dream…and the rest, as they say, is history.

Rene and Debbie have a wealth of theater experience between them. Rene has produced for Off-Off Broadway Productions, as well as tech and house managing for many repertory companies, such as Jean Cocteau Repertory Company and Once Upon a Time Theater Company. Some of his stage credits include Julian Marsh (42nd Street), Cosmo Constantine (Call Me Madam), Shem (Two By Two), Oscar Madison (The Odd Couple), Sasha (Room Service), and Arnold Wiggins (The Boys Next Door) for which he as awarded the NW Region of Ohio Excellence in Acting Award. His performance as Herb Tucker in Beari’s production of I Ought to Be in Pictures won accolades from the local papers.

Debbie has been performing since the tender age of 3 when she stood in front of an audience and sang with her grandfather’s big band. Hearing the applause, she was hooked for life. Debbie is a familiar face in Queens community theater. Her roles include Meg (Brigadoon), Sally Adams (Call Me Madam), Sally Durant (Follies), Dolly Levi (Hello Dolly), Margo Channing (Applause) Reno Sweeney (Anything Goes), Olive (The Female Odd Couple) and Ouiser (Steel Magnolias), a part that remains one of her favorites. Since 1997, she has become the primary director for Beari.

Beari has produced twenty-one shows at Trinity Lutheran since 1997. Their flagship production was a musical revue called Magical Musical Moments: Songs You’d Love to Hear Again. This revue was so successful that they have done four more since then, each with a different theme.

Debbie and Rene have had the opportunity to have local Queens playwrights showcase their works with Beari. This is something that they both strongly believe in, as well as giving previous “unknowns” the opportunity to get into community theater. They also like to try to do some things that have never been done before in Queens.

Rene and Debbie had been a couple since meeting on the set of Call Me Madam but Debbie was not prepared for the unfolding drama that occurred on the stage at Trinity for the closing night of Godspell. In front of the cast, crew and audience Rene asked her to marry him. Two years later, the wedding took place at, you guessed it, Trinity Lutheran Church where they were married by Deacon Kevin Ryan, also a member of Queens community theater.

The success of this company has been largely due to the hard work of its founders, as well as the hard work of their friends and associates: Abe Ber, who has stage managed for almost all of their shows and directed two of them; Jimmy O’Neill who is their lighting and tech specialist; John Baratta, who is the master carpenter responsible for building most of their sets and Alan Kingsley (Brooklyn/Queens Conservatory of Music), who has been their primary musical director. Throw in some of the most talented performers in all of Queens and Long Island and the result is Beari Productions. Beari hopes to continue presenting good theater to the people of Queens and also continuing its relationship with the good people of Trinity Lutheran Church. 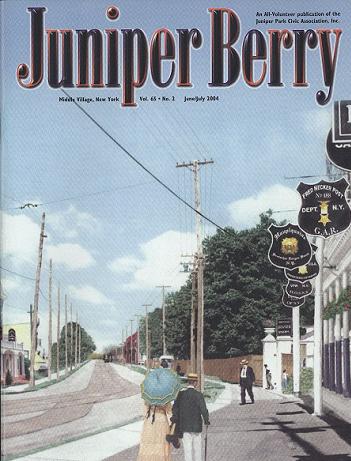