On Friday afternoon, November 4th 2005, Robert B. Catell, Chairman and CEO of Keyspan Energy Corporation transferred the deed of a 6.5 acre parcel – the former site of the Elmhurst Gas Tanks – to the City of New York. The fact that the deed was transferred for the sum of one dollar gives testimony to the business acumen of Mayor Michael R. Bloomberg who accepted the deed on behalf of all New Yorkers.The Parks Commissioner, Adrian Benepe, spoke of the challenge ahead to construct a beautiful park from scratch for the people of the surrounding communities. This moment would not have occurred except for the ambition, determination and faith of all those who believe that they can make a difference in the future of the world that they live. First,we have to credit the Scientists and Engineers who worked on the development of providing natural gas to heat our homes and drive the turbines that provide electricity to our communities.

This discovery made it possible to declare the Newtown Holders obsolete and set the stage for their demolition. Second, the determination and tenacity of the Juniper Park Civic Association and the community to fight off overdevelopment with all its detrimental consequences, in this particular case Home Depot, which would erect a box store with no amenities, saturate a neighborhood with automobile and heavy truck traffic, dry up main street and leave a community with no character or culture. I search for the words to describe the zeal of the Juniper Park Civic Association and the Maspeth-Middle Village Task Force in the long and sustained fight to make this stretch of Grand Avenue a truly “Grand” place to have a moment of reflection and be able to breath in all that “Mother Nature” could offer in an “Urban Wonderland.”

Third, the most significant, was our faith in no ordinary politician; I say no ordinary politician because ordinary politicians are endowed like the Chameleon and in similar fashion they are quick tongued, can change their colors from one street corner to the next to satisfy the crowd and camouflage the true intent of their future actions on community issues because their only goal is to maintain themselves in office.

But, for Mayor Michael R. Bloomberg, who serves the City of New York for the grand sum of $1, keeping his promise to a community was very important. And, on the one hand, anyone can suggest that the timing was purely political, but on the other hand he wanted to assure the community that the deal was sealed during his term of office. In January 2002 Mike Bloomberg was sworn in as the Mayor of a desperate city with its economy shaken and its downtown area left in ruins from the attack of 09/11/2001. However, with his experience as a very successful businessman he was able to guide the City of New York into the success it enjoys today. Besides inheriting a city physically scarred and emotionally stressed, he inherited several mistaken concepts from the Guiliani administration. But that is for another article.

Thank you Mayor Bloomberg, thank you Mr. Catell, thank you Mr. Ognibene, thank you Mr. Gallagher and most of all thank God for the Juniper Park Civic Association and the all the spirited individuals who stand up and fight for the community. 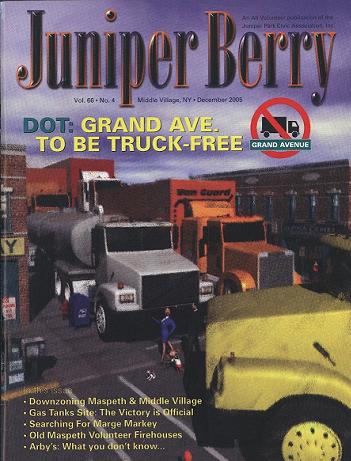