Walking through our community, we reminisce of the old Victorian homes and large farmhouses of yesteryear that have now been ripped down and replaced by large, multi-family attached homes.

Some unscrupulous developers have the mentality that they can build absolutely anything anywhere. They stop at nothing to promote their own greed and the end product is a neighborhood that has been radically changed. Our community is left with the devastating impact of overdevelopment such as overcrowded schools, traffic congestion, a decrease in our public safety and inadequate sanitation.

As our single family homes disappear we are often left with three family homes, with a one car garage. Many crafty builders erect legal two family with a bare walk-in space (with no fixtures). The new homeowners then converts the space to an apartment.

Under current zoning regulations (R4, R5 districts) builders must provide a parking space for each apartment unit. In this day and age of multiple automobile families a 3 family home many times can produce at least 6 cars. Builders erect these homes with only a one car garage with one space in front of the garage. They satisfy the zoning parking requirement for a two family home while really building a three-family home. Unfortunately this has been the blueprint of most of the homes built in Middle Village and Maspeth in the last 30 years. Look at our streets for the consequences of this inadequate zoning and building inspections. Parking spaces are at such a premium on most streets that residents have taken to parking in crosswalks, fire hydrants and
driveways.

Self Certification
Another problem is the city inspection system or the lack thereof. Rather than relying on a site visit from a Department of Buildings (DOB) inspector to ensure that alteration or construction plans are legal, the City of New York allows licensed engineers and architects to sign off on their own plans. Mayor Rudy Giuliani instituted self-certification in 1994 as an antidote to the red tape that he said was choking developers. To combat the obvious conflicts inherent in self-policing, the penalty for filing false papers is license revocation. But such consequences are rare. At the same time, the filing and other fees generate more revenue than the Department of Buildings spends to ensure building safety.

However the news gets even worse. An audit report, released by the Comptroller's Office on April 30, 2003 disclosed that 67 percent of professionally (self) certified applications submitted to DOB contained errors.

Overdevelopment has already caused so much damage to our community and if left unchecked, it will become much worse.

Thankfully the news is not all bad. Late last year a major battle against overdevelopment in our community was led by the Juniper Park Civic Association. Our neighborhood was preserved and victory achieved in defeating a Home Depot planned for the Elmhurst Gas Tanks property. Mayor Bloomberg responded and listened to the community.

In this area, overdevelopment will now face its toughest adversaries – communities who will fight to protect and improve their quality of life and elected officials who will make fighting overdevelopment a priority.

It is important for our community to stand united in this fight against overdevelopment and create strategies and actions to thwart the future onset of unsightly and unwanted developments in our community. Of course, this process will take time, energy, dedication and commitment, but if the end result protects our neighborhood and enhances our quality of life, it will be time well spent.

Councilman Gallagher has been pushing Mayor Michael Bloomberg to institute an Overdevelopment Task Force for the citizens of Queens County for ensuring the preservation and character of our communities.

Gallagher is also considering the following legislation to be presented before the New York City Council to protect our homeowners and our community:

* Legislation that would require general contractors to be licensed by the City of New York. Currently, general contractors do not have to have a license to do construction work in the City. Homeowners need protection by insuring that contractors are qualified and fit to do the work that they are paid to do.
* Legislation that would require builders to post a $50,000 performance bond when constructing one-family and multi-unit housing, which will be held until the homeowner receives a final Certificate of Occupancy.
* Legislation that would prohibit builders from doing construction work on weekends.
* Council Member Gallagher also is exploring the possibility of requiring the Department of Buildings to review restrictive covenants prior to issuing permits to develop.

Elimination of Self-Certification
Late last year the Juniper Park Civic Association observed the construction of four 3-family homes on 58th Avenue in Maspeth, near the Long Island Expressway. There once stood a detached single family on the large lot. The developer constructed these homes with driveways much too steep to drive a car down and impossible to put a car in the garage (see photo right). The driveways actually posed a threat to pedestrians since a passerby could slip on the narrowed sidewalk and plunge down the embankment. Th civic association reported the problem to Mayor Bloomberg himself at a meeting at Gracie Mansion. The Mayor notified the Department of Buildings who stopped the construction and forced the architect to redesign the front of the buildings. The developer filled in the driveways on two of the buildings and placed parking for 4 cars in front (see bottom photo right) However loopholes in the zoning regulations still allowed the developer to squirm out of the poorly designed fiasco. The neighborhood is left with concrete parking lot in front of these homes, too little parking, and poorly designed and narrow sidedriveways that still pose a hazard to pedestrians and neighbors.

Lacking any green space, this unsightly property will feature cars crowded in front yards (along with oiled stained concrete) and too little parking. Expect at least a dozens additional cars parking on the street, in crosswalks and at fire hydrants.

“This property is a poster child for what is wrong with self-certification, said Bob Holden, president of the Juniper Park civic Association.

The JPCA is calling on Mayor Bloomberg to protect communities in the city by hiring more building inspectors. A good start would be at least two inspectors assigned to each community board district.

Mr. Mayor, the time to act is now! 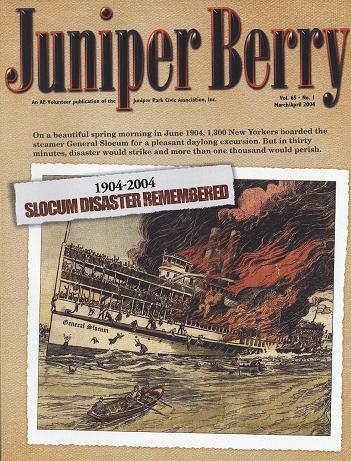