Fernanda Avolio takes care of her 82-year old mother Rose, who can get around only in a wheelchair pushed by her daughter. Fernanda is well aware of issues and obstacles in negotiating certain streets in our neighborhood. In January, Angela Hurtado was killed in a pedestrian crosswalk while crossing Grand Avenue at 69th Place. In response, the DOT installed a barrier and bollards to prevent illegal automobile turns. What the bollards did was make Fernanda’s job much harder. Fernanda knows that crossing anywhere on Grand Avenue while pushing a wheelchair is difficult. However, trying to cross at 69th Place is almost impossible. Unbelievably, there are no wheelchair ramps on either side of Grand at 69th Place. In March 2014 Fernanda complained to 311, but nothing was done. Fernanda called Councilwoman Crowley’s office, and her staff member told her there was nothing they could do. Is anyone surprised? So Fernanda turned to Assemblywoman Marge Markey’s office. It gets worse. Markey’s Chief of Staff, Eileen Boland told Fernanda to bring her mother to the office on August 27th, which just happened to be one of the hottest days of the year. Why did Markey feel it was necessary for Fernanda to bring her mother to the office? Well, it is an election year. Markey even brought in Queens DOT Commissioner Dalila Hall to the meeting. The result? Fernanda may have to wait at least a year and there may be problems getting the sidewalk cut due to “street furniture obstacles.”

Fernanda was frustrated and angry that Markey, who she referred to as “unprofessional and rude,” would make her come down to the office only to disappoint her with more bureaucratic mumbo jumbo. Making our streets wheelchair accessible should be a no-brainer, no meeting necessary, it’s already mandated by law. Fernanda is not going away.

THEY KEEP ON TRUCKIN’ ON GRAND AVE

Yes we have no papers, only trash

ABBRACCIAMENTO’S TO BE DEMOLISHED THIS FALL

OUT OF LUCK AFTER DARK

A Fence Too High

LETTERS TO THE EDITOR

REMINDER: ALL FLYERS ARE ILLEGAL

SMILE! YOU’RE ON A SPEED CAMERA! 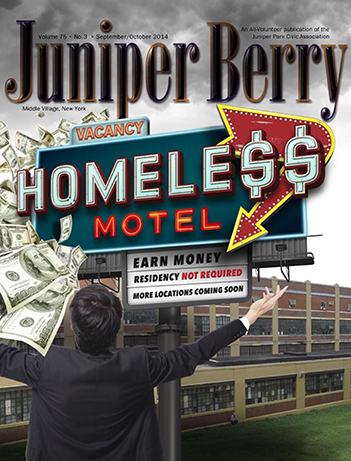