The School Construction Authority (SCA) is pushing forward with a plan to site a 1,100-seat high school at the corner of 74th Street and 57th Avenue at the former Restaurant Depot site. This is a very bad idea for several reasons. There exist many factors which will lead to a detrimental impact on our quality of life.

Why here?
First of all, there are 2 schools right nearby – PS58 with 975 students a block away and IS73 with 2,000 students about 4 blocks away. Most of the students at IS73 are not from this neighborhood. We already have Newtown and Grover Cleveland High Schools operating above capacity in neighboring Elmhurst and Ridgewood respectively. However, 73% of households in Middle Village and 69% of households in Maspeth have no children. Between these two neighborhoods, there are approximately 70,000 people. Meanwhile, 45% of households in Elmhurst and 50% of households in Corona have children and each of these communities have more than 100,000 residents. The need for schools is obviously greater in these areas, not in Maspeth or Middle Village.

If the proposed high school is built, there will be 3 schools located within 4 blocks

Geographically, this site is at a disadvantage because there is limited access to routes to the south because of the presence of the Long Island Expressway. The Grand Avenue buses are already packed to capacity during after-school hours, so much so that many times riders must allow several buses to pass before one comes along that he or she may board. And with 3,000 kids pouring onto the streets at one time and then lingering, pedestrian traffic is discouraged and business along Grand Avenue suffers. The Maspeth Chamber of Commerce is against the building of the school for that reason.

Traffic around the existing schools comes to a standstill during the afternoon and there is double parking, blocking of fire hydrants and driveways, etc. What will happen when a high school is added into the mix? The SCA does not include parking in its plans, and you know that the teachers will drive to work since there is no subway nearby. Senior students may also drive. Where will they all park?

We have read that a commercial establishment is interested in the property, but they know the City has its eyes on it for a school and is willing to use eminent domain if necessary, so they have been reluctant to make an offer.

Why so many kids?
In November 2008, the New York Times published an article which found that high schools with fewer than 500 students did twice as well than larger schools. Why will this proposed school contain 1,100 students if this is not the ideal learning environment?

District 24, which covers an area from Long Island City to Corona, contains 15 high schools. Most of the newer schools were built in LIC in industrial areas with subways nearby. They all are “themed” or “career” schools. This is the trend. Career schools cannot be zoned locally and must be open to the entire city. Local students interested in whatever career is being taught at this school cannot be guaranteed seats. There are a total of 529 high schools in the City, of which 32 are zoned locally. None of the locally zoned schools are located in District 24. This again raises the question of why we should invite a 1,100-seat career school into our small town that has inadequate transportation in order to educate kids from the rest of the City.

Overdevelopment and overpopulation
One thing that needs to be mentioned in an article about new school construction is that the rampant overdevelopment, illegal apartments and illegal aliens that the City encourages are no doubt putting strains on school services. Now the City can’t build schools fast enough to deal with the population overload that they brought upon themselves.

“A high school in your own backyard will be great for the neighborhood,” the Department of Education brainwashes parents of public school children into thinking and repeating. This school is being shoved down our throats and these parents are being duped. This is a clear case of overdevelopment. SCA simply looks at the square footage of the building and how many kids they can pack in. They don’t care about the community or a school’s impact on residents’ quality of life. We will be doing nothing more than absorbing the overflow of students from Grover Cleveland and Newtown, high schools with poor graduation rates. And it’s pretty certain that people who live in Maspeth and Middle Village will not be sending their kids to a failing school. This will also put an unfair burden on the NYPD, the ranks of which are forcibly shrinking. There is not enough manpower to keep an eye on the kids and direct traffic flow after school. Police on the streets at dismissal time are a necessity because of the increase in vandalism and crime that happens in the vicinity of public high schools.

We are going to have a brand new park where the Elmhurst Gas Tanks formerly were. We envisioned the spot as a place of quiet reflection for seniors and a place that mothers could take their small children. If this high school is constructed at the proposed location, we can kiss that goodbye.

We want our elected officials to take a long hard look at the numbers and take all of the issues into consideration before they cave into the PTA moms and the UFT reps. They need to say that this is not right for our neighborhood. If they want to do something for students here, they’ll fight for vouchers to give parents a tax break on private school tuition. Those schools manage to educate students for far less money and have more than twice the graduation rate that public schools do.

Call Councilwoman Elizabeth Crowley at (718) 366-3900 and tell her to vote against the proposed Maspeth high school. If she votes no, the rest of the Council will likely follow suit. Remember that she is counting on your support this November for re-election.

The following are photos of vandalism around Grover Cleveland High School…do we want this in Maspeth? 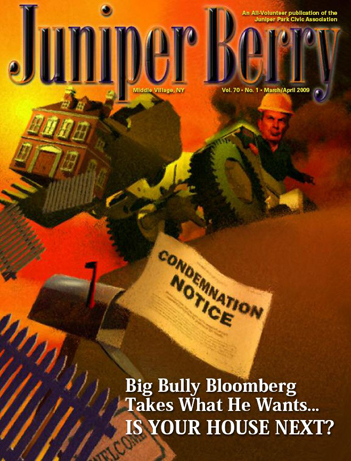