Along with the Juniper Park Civic Association celebration of our 70th Anniversary several other neighborhood icons are also celebrating milestone years, here’s a few:

The Roman Catholic Church of the Transfiguration, the first Lithuanian national church in Maspeth, was dedicated on August 8, 1908 and has for a century remained a thriving and vital force in the spiritual realm of the Maspeth Community.

Despite the economical hardships faced by the congregation, they were very supportive and made the necessary sacrifices to build a priests rectory in 1911. By the First World War, the parish began to enjoy relative prosperity and a steady growth of parishioners.

The Church of the Transfiguration suffered the trauma of two major fires. In 1919 a conflagration destroyed a substantial part of the original church and much of the church furnishings. With the generous financial support of the good parishioners, the church was completely restored, with the furnishings, in a relatively short period of time. But in 1925, a second fire razed the church building to the ground. Instead of re-building, the old St. Stanislaus Kostka church property was purchased, providing a church building, priests’ rectory and additional grounds, located on Perry Avenue.

The Lithuanian Franciscan Sisters soon arrived to conduct religious instructions for the children of the parish. The needs of the growing parish necessitated the building of a new church complete with Parish Hall and on May 27th, 1962, the new Church of the Transfiguration was dedicated. Lithuanian folk art elements adorn the co-operative achievement of all those who contributed time, energy and money over a long period of years.

With the good cooperation of the Trans Catholic War Veterans Post No. 869, a memorial monument was erected outside the church hall. A beautiful Lithuanian Wayside Cross shrine was erected on the church grounds with the generous support of the Transfiguration Knights of Lithuania Council No. 110.

In 2006, Fr. Paul Woods, pastor of Transfiguration, was presented with a third assignment in addition to the Chaplaincy at Queens College and Pastor at Transfiguration. He was installed as Pastor at Saint Stanislaus Kostka Church, also in Maspeth, and was given the mandate by Bishop DiMarzio to begin the “reconfiguration” of the two Churches, combining ministry and resources where possible into one, but remaining two viable, vibrant Catholic parishes.

Over its 100 year history, Transfiguration has only had 7 pastors:

Times Newsweekly in print for 100 years!
Founded in 1908 as RIDGEWOOD TIMES, the paper has long been active in community affairs, working with local civic groups in obtaining improvements—libraries, schools, senior centers—and recognition for the area. The nation’s largest historical district is located within the paper’s circulation area. WHN, one of the City’s first radio stations, was originally part of the corporation, which has continued through two world wars, and remains healthy while many other newspapers have folded. The re-naming (in 1989) reflects their interest in expanded coverage and circulation. TIMES NEWSWEEKLY is sold at newsstands throughout the borough, not given away, and mailed to subscribers everywhere in the country.

From its inception in 1908 as the Ridgewood Times, The Times Newsweekly newspaper has continuously and successfully held to the highest standards of ethical journalism—earning its reputation as Queens’ most credible weekly publication.

For the homeowners and business firms of Queens, the Times Newsweekly delivers community news that cannot be obtained anywhere else—not in the dailies; not in the shoppers.

The essential news analysis, opinion pieces, in-depth articles, business, local sports, and entertainment features appearing in the Times Newsweekly give it an extraordinary ability to influence its readers.

Joe Abbracciamento's Italian Restaurant started with brick oven pizza and standard pasta dishes 60 years ago in Ozone Park. Since then, they relocated in 1954 to Woodhaven Boulevard in Rego Park and have been a fixture for fine Northern Italian dining ever since.

John Abbracciamento and his brother, Joseph, took over the business when Joe, Sr., passed away back in 1980. The brothers, John, as the chef, and Joseph, and John's wife, Maria, have been running the business ever since.

In 1962 they began onsite catering with one small room accommodating 60 or 70 people. The Abbracciamento's took over the nearby Drake Theater when it became available and they turned that area into a catering hall.

The Abbracciamento's emphasize tradition and family and the restaurant has had many successful years at its current location with full support from the community. It is the place to go if one wants a fine dining experience of
Italian food expertly cooked by John Abbracciamento, the chef.

The original Queens Chronicle was simply called “The Paper” and was started by my mother, Susan Merzon, on November 2, 1978. Like most new businesses, the newspaper was a small, two-person operation in the beginning and success was far from guaranteed. Actually, it was started as a hobby because of concern for the local community.
A few years later, in 1983, Stanley Merzon joined the company and together they built the newspaper into a multiple edition publishing company. In September 1984, by changing the name to the Queens Chronicle, they set their sights on expanding the paper beyond its Howard Beach and South Queens base. Over the next few years, three more editions of the Queens Chronicle were started to give the newspaper a Queenswide presence.

I joined the company in December 1990 after graduating from college. Even though we suffered a devastating fire in our office in December 1994, two feet of snow on several occasions, a blackout and other events, we have continuously published 1562 weeks of the Queens Chronicle for our readers.

We now cover all of Queens, except for the Rockaways, with nine editions of the Queens Chronicle reaching over 400,000 people each week. Along with our website QueensChronicle.com, we are proud to be a part of your life every Thursday.

Along with the entire staff of the Queens Chronicle, I would like to thank you for bringing us to our 30th anniversary and I hope to celebrate our Golden 50th with you in November 2028.

It was named for Walter G. Eliot, an engineer in the Queens Topographical Bureau who was in charge of the Bureau in 1910. (He even went so far as to name the street a block over for his daughter Marion. Marion Avenue was renamed 63rd Avenue in the 1920s.) It was known as Eliot Avenue until 1925, when it was changed to 61st Avenue. In 1930 or 1931, the street’s name was changed back to Eliot Avenue and has remained so ever since.

For many years, it was planned that this street would extend to Woodhaven Boulevard and further to Queens Boulevard, but it was not completed until late 1938, just in time for the upcoming World’s Fair in 1939-40. Eliot Avenue was sometimes called “World’s Fair Avenue, because it was the main road, if not the only road, that lead from Brooklyn to the World’s Fair in Flushing.

Much of the road in Middle Village is laid over the ancient Juniper Swamp (a swamp that existed when the original settlers came here in the 1600’s). Many delays were caused by the refusal of the cemeteries to permit a road to be cut through from Mt. Olivet Crescent going east. After many years of planning, the City was permitted to cut a narrow two-lane road through the cemetery. This two-lane portion of Eliot Avenue is still in use, while most of Eliot Avenue is much wider.

Eliot Avenue, as widened and paved from Metropolitan Avenue to Queens Boulevard, opened officially on February 11, 1939. Earlier this year, a new sewer line was installed beneath the stretch between the cemeteries and a wider sidewalk was built.

If Mr. Eliot were alive today, he would see a beautiful tree-lined road, heavily traveled by area residents, and with lovely homes and stores. Surely a sight to make him proud! 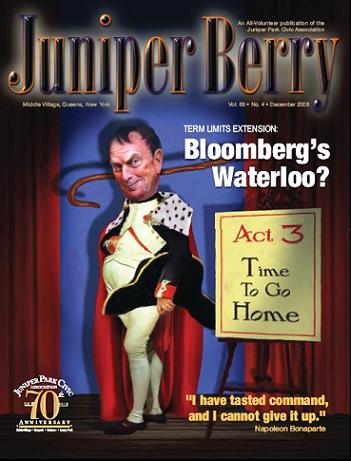