At the February 10, 2021 monthly meeting of Community Board 8, a motion in favor of Planning Together (Intro 2186-2020) was defeated unanimously.

Our Zoning Committee held a meeting at which Ms. Annie Levers from the New York City Council presented the proposal and Intro 2186-2020. We also invited Urban Planner Paul Graziano who gave his own presentation detailing how Planning Together could affect our communities in Queens. The Committee voted unanimously to recommend that the Board not support this proposal. After further review by the full Board, our members voted unanimously against this proposal based on the following concerns:

The Introduction 2186-2020 is a far-reaching, complicated piece of legislation that could have profound effects on the city. It is not a task to be taken hastily and without a significant amount of deliberation and public review. It is certainly not legislation that should be enacted by a lame-duck legislature and Mayor.

When a rezoning is consistent with the comprehensive goals, it can be approved without ULURP. It would allow a developer to proceed with construction without further review. It is fast tracked with a minimal environment impact statement. This is significant.

There is planning to approach zoning and capital improvements in association with rezoning efforts. Determining future capital and infrastructure needs under long term planning is reasonable for major works such as sewers, water supply, and similar structural interdependent projects.
Committing capital funding on a strict timetable is very problematic due to inconsistent funding. The task of developing a comprehensive plan will require significant amounts of new resources and no dollars have been identified. This matter is being considered in a time of severe fiscal crisis and population fluctuations. It is imprudent to make long-term plans when the financial stability of the city and state have not been addressed.

We have seen a decrease in the city’s population before Covid-19. There has been an exodus from the city and deaths since Covid. It would be prudent to determine what our population status is before a bill of this nature should be considered. Such a delay would also provide time to get the final 2020 Census figures.
The position of Director of Long-Term Planning has been given very extensive authority and power with significantly excessive discretion. The amount of redistribution of responsibilities raises questions about whether such changes can be done legislatively. It creates a change to the City Charter without referendum.
Community District 8 is primarily a one-family zoned district. With a mandate to reach a certain quota of housing units each decade, upzoning will have to occur. This can potentially reduce or eliminate single-family zoning. This may lead to an exodus of middle-class families to the suburbs.

The report identified several strategic issues that could benefit from more coordinated data sharing and analysis that exist in various agencies or that it proposes to establish.

The report made several conclusions that are not supported by accurate or complete data, which conclusions could have significant and lasting negative implications on communities throughout the city.
There are misleading and irrelevant comparisons made in the report to other municipalities related to low density residential communities in New York City.

There are certain incorrect assessments presented in the report regarding rezoning actions by the city in recent years showing, contrary to facts, that downzonings have benefited “white and wealthy” communities. Contrary to the report’s conclusion, the elimination of single-family zoning and parking requirements and legalization of basement, attic and garage apartments would, in fact, disproportionately negatively affect minority communities in outlying and underserved areas of the city.

Lastly, the voters overwhelmingly rejected a referendum calling for comprehensive planning. The will of the people should not be ignored by the New York City Council.

By copy of this letter, we urge that the City Council Members consider our concerns. Please vote against this proposal that will have a detrimental effect on our communities in northeast and mid-Queens.

CB5 has not yet weighed in on the matter. – Ed. 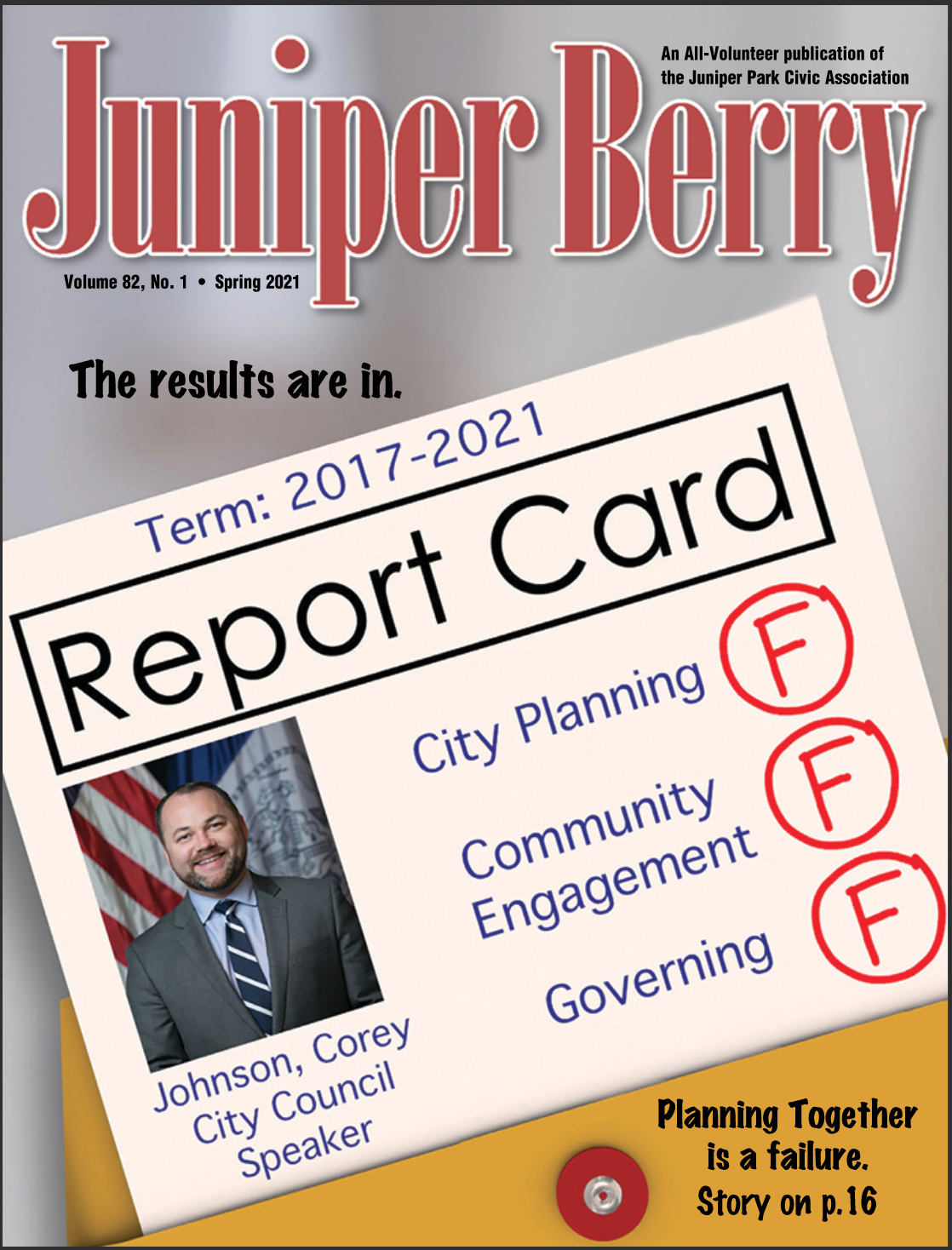